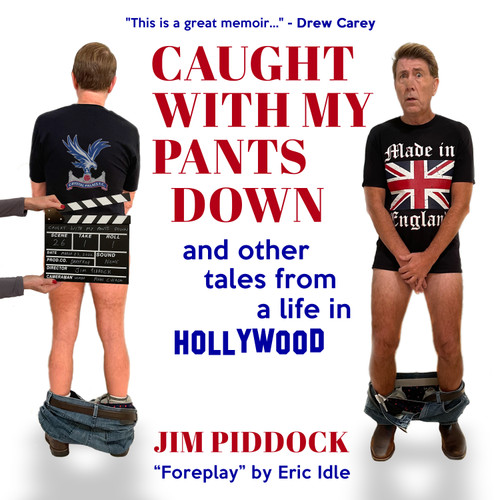 For more than four decades, Jim Piddock has navigated the turbulent waters of Broadway and Hollywood as an actor and a writer. In this highly entertaining and witty account of his journey from a small village in England to the heady heights of the Hollywood Hills, he pulls back the curtain—with remarkable honesty and humor—to reveal what really goes on behind the scenes in the entertainment industry. But underneath this lighthearted, irreverent romp through the world of show business—and Jim's involvement with Crystal Palace Football Club in his spare time—lie some deeper reflections and the incisive conclusions on what the real meaning of family is, how to make destiny-defining choices, and the importance of living life to the fullest.

As an actor, Jim starred in several Broadway shows in the 1980s, including Present Laughter, Design For Living, and the original production of Noises Off. Since then, he has appeared in numerous movies, such as Independence Day, Lethal Weapon 2, The Prestige, Best in Show, The Five-Year Engagement, A Mighty Wind, Kill Your Friends, and Woody Allen’s You Will Meet a Tall Dark Stranger. He’s also been seen in dozens of TV shows, like Modern Family, Mom, Two and a Half Men, Lost, Monk, Friends, ER, Mad About You, The Drew Carey Show, and Castle. He was also in the award-winning HBO series From the Earth to the Moon and starred in the CBS miniseries The Women of Windsor. In 2007 and 2012, Jim secured his reputation as one of the UK’s most notable comedic exports when he starred on stage in Hollywood with Russell Brand, Billy Connolly, Tim Curry, Eric Idle, Eddie Izzard, Jane Leeves, Emily Mortimer, Tracey Ullman, and Sophie Winkleman in What About Dick? As a writer/producer, Jim’s films include Tooth Fairy, The Man, and A Different Loyalty. With Christopher Guest, he co-wrote and starred in the HBO series Family Tree and Mascots for Netflix. Production on his film Frankel is due to start in 2022 in the UK.

"Jim has a big heart and a sharp wit and both are on display in the pages of this book. So f*cking read it."

"Jim has done that rare thing that perhaps only Michael Caine and David Niven have done before; conjured a funny, inclusive, whimsical, and magical tale..."
- Russell Brand

"...this laugh-out-loud book...entertains endlessly and most wisely."
- Jean Smart

"When I wasn't gasping or laughing my head off, I was wondering why my life is so boring compared to Jim Piddock's."
- Elizabeth McGovern

"Head to head with Shakespeare, most critics have said Jim would win in a knife fight."
- Eddie Izzard

Heroines of Avalon and Other Tales

Breaking Sad: What to Say After Loss, What Not to Say, and When to Just Show Up