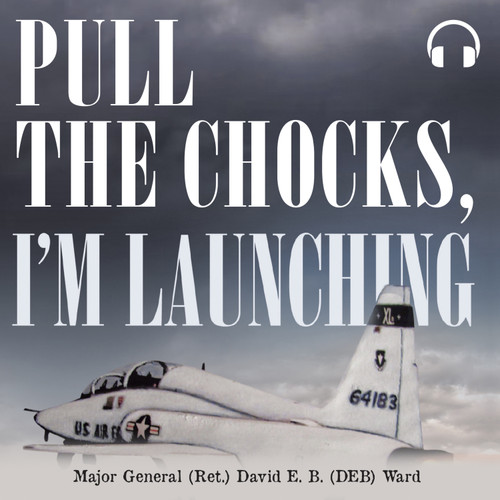 My book title: Pull the Chocks, I’m Launching is an inspirational metaphor for removing obstacles in your path to obtaining your dream.  In August 1967 I fulfilled my dream of becoming a fighter pilot when I was accepted into the 123rd Fighter Interceptor Squadron, the Redhawks, of the Oregon Air National Guard.  That dream became indelibly ingrained in my psyche when on the morning of my first day in Anchorage, Alaska during the Korean War, at the age of 12, I watched F-80 fighter jets make simulated gun strafing passes on a firefighter training tower at the city’s edge of the Cook Inlet. Circumstances in my life, from childhood to early adulthood, generated a host of highly unusual real-life stories, ranging from the humorous to the tragic.  Several of these were woven into the fabric of then-current events that made their mark in history. The numerous million-to-one circumstances in my ‘Huck Finn story on jet fuel’ and the interesting people I came into contact with during this journey contributed significantly to the richness of those experiences.

Major General David E.B. (DEB) Ward retired from the Air Force and Oregon Air National Guard on October 31, 1996, after over 36 years of military service.  He began his career as an Air Force student pilot at Bainbridge Moody Air Force bases in Georgia. His first duty assignment after pilot training was initially as a T-33 and then T-38 instructor pilot at Laughlin AFB near Del Rio, Texas.  His last assignment as an active duty member of the Air Force was a remote tour stationed at Osan Air Base, Korea where he served as a Forward Air Controller and the Korea Command T-33 operations manager and chief pilot. In the Oregon ANG, the General flew several different jet fighters including the F-4 Phantom and F-15 Eagle, and accumulated 6750 tactical jet flying hours in his military career.  He served in a variety of diverse assignments including Instructor Pilot, Functional Test Flight Pilot, Chief of Standardization and Evaluation, Aircraft Chief of Maintenance, Group Deputy Commander for Operations, Fighter Group Commander, Oregon State ANG Commander, and Air National Guard Special Assistant to the Commander U.S. Air Forces Europe.  He also had a career as a pilot for Pan American World Airways and Delta Air Lines. General Ward is married to the former Antje Rickert and has two adult children, Army Colonel (Ret.) Sean Ward and Mrs. Bronwyn Starostka, four grandchildren and two great-grandchildren.