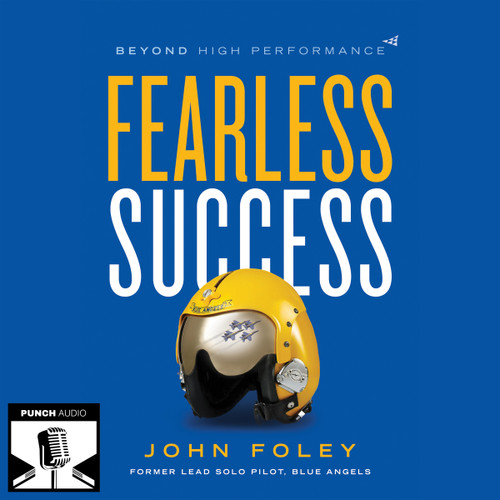 AMAZON BESTSELLER IN BUSINESS AND ORGANIZATIONAL LEARNING. Are you ready to take your individual and team performance to the highest level? It's time to get in the right mindset and enter the High Performance Zone! The quest for perfection is not only possible--it's actually our natural state, says author and former Blue Angel pilot, John Foley. Imagine what the same preparation and mindset that allowed him to fly in formation mere inches apart from another jet can do for you, your teams, and any organization. In Fearless Success, John Foley gives us the secrets that elite performers know and practice on a daily basis. How do you get from your current state to your future state? Going beyond high performance requires combining operational excellence with a proactive/positive mindset. The underlying ''Glad To Be Here'' ethos is at the core of everything Foley teaches. With this foundation in place, any individual or team looking to achieve greatness can easily understand and implement the author's tools and processes. Filled with lessons from his days as a Blue Angel and a leadership expert empowering over 1,000 companies, this book includes proven blueprints on how to--Lead through change, Build high performance teams, Elevate belief levels, Execute with high trust & Unite a commitment culture. Fearless Success will change your outlook on business and life. Up we go!

John Foley is a former lead solo pilot of the Blue Angels, a Sloan Fellow at the Stanford School of Business, and an expert in the how of High Performance teams. As a Blue Angel, John consistently performed in an extreme, high-stakes environment, flying at speeds of more than 500 miles per hour and in formations as close as 18 inches apart. To survive in those circumstances, he relied on a culture of high trust and leadership that turned inherently unforgiving flight into extraordinary experiences. In John's post-Naval experiences as an entrepreneur, a venture capitalist and a business consultant, he employs the intense realities of his aviation career as a metaphor to motivate teams to reach for their highest potential and sustain excellence under dynamic change. For over a decade, John has shared his exciting, rare journey with audiences around the world, becoming one of the most in-demand leadership and performance experts. John has worked with some of the world's top organizations such as Microsoft, Hitachi, Intel, Cisco, Mercedes-Benz, Chevron, Marriott, Hilton, Penske Racing, the LA Kings, the Mayo Clinic, Merrill Lynch, Mass Mutual, Bank of America, GE, P&G, Gillette, and Google. John graduated from the US Naval Academy with a degree in mechanical engineering. As a defensive back for the Midshipmen, he played in two bowl games and helped Navy to one of the best four-year records at that time. As a pilot, John was a ''Top Ten Carrier Pilot'' six times before becoming a Marine instructor pilot and a Blue Angel. He holds master's degrees in business management from the Stanford Graduate School of Business, in international policy studies from Stanford University, and in strategic studies from the Naval War College. In 2016, John was awarded an honorary PhD from UNAM in Mexico. In 2011 John founded the Glad To Be Here Foundation. Through the foundation, John donates 10% of all his speaking fees to charity. To date, the foundation has raised over 2 million dollars for over 400 charities around the globe.

How to be Successful in Spite of Yourself

Ways to Go Beyond and Why They Work