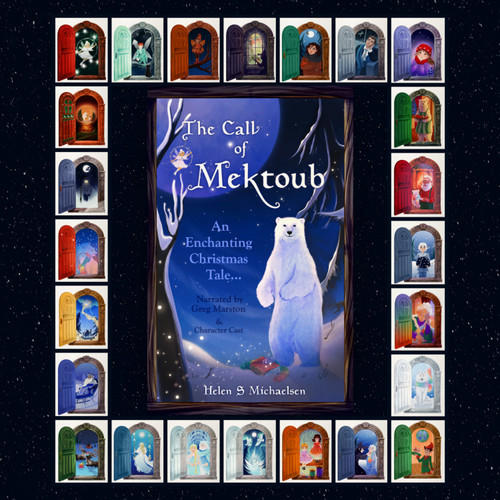 When the sleigh and two young reindeer are stolen three nights before Christmas, the characters from an old book (The Land of Never Grow Old), must enlist the help of an English mother and daughter to save the Magical Lands of the North from being lost forever.  Their copy of the book has been handed down three generations of mothers and daughters and is one of only a few that remain in existence.  Similarly, the characters from the book can only exist for as long as children believe in them.

Emma and her daughter, Lucy, must embark on an unexpected adventure that tests their courage, and determination, and reveals their willingness to embrace the kindness and compassion the world needs now more than ever.

The story is presented in the style of an advent calendar, with a chapter for each night of December until Christmas Eve.  The chapters are enhanced by music and sound effects, with eight of them containing original songs created by the author and her musician friends.

Helen S Michaelsen describes herself as "a creative who likes to dabble in many areas!".  The old book in the story is a genuine legacy handed down by her mother, who sadly passed away in 2020.  It has always been Helen's dream to bring the old story back to life, having grown up with the character of Mektoub the polar bear, when nobody else she knew had ever heard of him.

Music always played a significant part in Helen's Devonshire upbringing, singing and dancing on stage herself many times until the age of 14.  Her mother played the piano and her father always had music of some kind playing at home and in the car. Since moving east to Dorset in the mid 1990's, and having a son and daughter of her own at the turn of the century, Helen began writing her story around the old book in 2008, often working into the post-midnight hours, where she could escape into her personal realm of fantasy.

In 2012, Helen made her online debut writing poetry and lyrics for musicians around the world on the Soundcloud music platform, some of whom became very dear friends and helped Helen with her quest to create, first a musical ebook, and now, an audiobook like no other.  She has always maintained, "life would be so much better set to music!" And she adds, "The audiobook is really a movie, but it's up to you to imagine the visuals yourself..."

Heroines of Avalon and Other Tales

The Love Compass: A Girl’s Guide to Finding Authentic Love