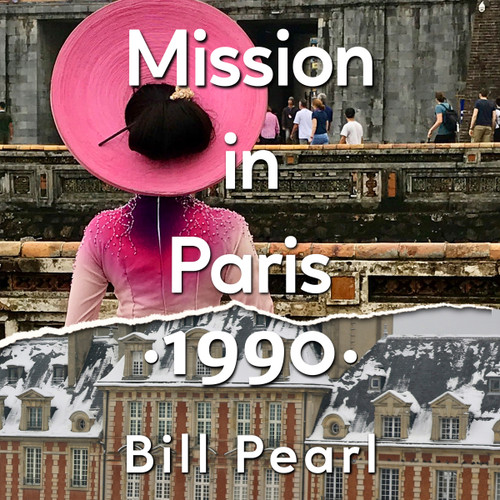 1990... Vietnam and America have not yet made peace. Vietnam is freshly wounded from fighting border wars with China and on the eve of becoming a market economy. The first bombing of the World Trade Center is three years away, so America is not yet awake to the dangers of Islamic terrorism. Nevertheless, Vietnam and America recognize the importance of ending their differences.  Mission in Paris 1990 is the story of how an American media tycoon, Robert Samberg, whose youth in 1968 tied him to Vietnam’s future, is recruited to explore peace talks, never expecting that a mission to explore political reconciliation would lead him to a path of personal reconciliation.  On the eve of his greatest business triumph, he rediscovers My Hanh, a long-lost love from Vietnam and a son he never knew he had.  Robert’s life is upended in this tale about the enduring strength of love and the power of forgiveness.

Bill Pearl’s experiences as a student in Paris inspired his first novel, Hearts on Fire, Paris 1968. His experiences in a family business and longstanding interest in Vietnam inspired the sequel, Mission in Paris 1990, which he researched with visits to Vietnam, Paris, and Auvergne, France. Bill holds a master's degree in International Relations with a specialty in diplomatic history. During the 1970’s he served as a speechwriter for John C. Sawhill and Frank Zarb, the first heads of the Federal Energy, and wrote a weekly column for 800 newspapers in the United Administration States. His poetry and prose have been published in Time Magazine, the George Washington University Hatchet, and Paris Voices, Paris, France. In addition, he is the author of two award-winning chapbooks of poetry, Heart Songs and China Heart.

Pearl manages to create two compelling characters in Samberg and My Hahn, atmospherically convey the social and political feel of Vietnam in 1990, and steadily ratchet up the tempo of the plot. The novel succeeds as both a time capsule and an absorbing love story.