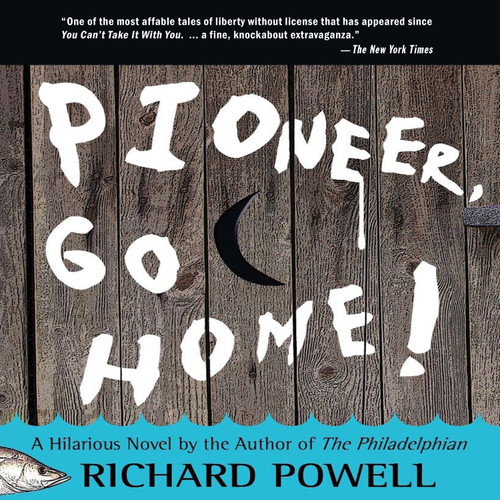 Pioneer, Go Home! is a warm and witty tale of the little man versus “Big Gummint.” Powell relates the adventures of the Kwimpers—a motley clan of New Jersey Pineys who break down on the side of a southern highway project and decide to claim squatter’s rights. Call them “hicks” or “bumpkins” if you like, but these Kwimpers are considerably more resourceful than most folks give them credit for—and ten times as stubborn! When the government orders them to vacate, Pop Kwimper gets his dander up and the die is cast. Hilarity ensues as the family defends its homestead against an onslaught of conniving bureaucrats, Mother Nature, and the mob.

You can’t help but cheer for the heroic Kwimpers as they thumb their noses at the authorities, struggle to get a business going, stand up to gun-happy gamblers, and tangle with a foxy social worker over custody of twins Eddy and Teddy. Meantime, young Toby Kwimper and the family’s endlessly resourceful “babysitter,” Holly Jones, find the time to fall in love—though it takes Toby some time to realize that Holly is “real growed up.” Fish and fishing are recurring themes in many of Richard Powell’s novels, and there’s plenty of both to go around in Pioneer, Go Home!

A seventh generation Philadelphian, Richard Powell (1908-1999) was a prodigiously talented writer whose 19 full-length fictional works included many mysteries along with several comedic, dramatic, and historical novels. Prior to retiring to Florida in 1958 to write full time, he studied history at Princeton, was a reporter for the Philadelphia Evening Ledger, served in the Army during WWII, and worked for many years in advertising and public relations. No matter what fiction genre Powell turned his hand to, his wry characterizations, crackling dialog, and deft plotting made each book an irresistible page-turner. Several of his novels including The Philadelphian were made into feature films. --This text refers to an out of print or unavailable edition of this title.

Ways to Go Beyond and Why They Work