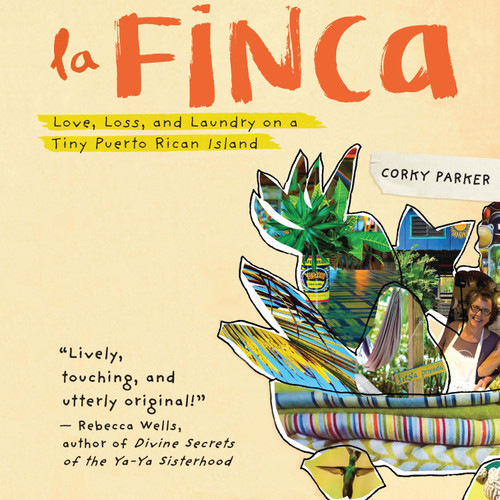 At age forty, Parker surrendered to her Swept Away meets Swiss Family Robinson fantasy of owning an inn in Latin America, far from her home in the Pacific Northwest. For the next twenty-plus years Parker ran La Finca Caribe, an eco-lodge in Vieques, Puerto Rico. What started as a “half-baked duct-taped dream” grew into an acclaimed, rustic inn, frequented by guests from around the world. Sketchbook in hand, Parker chronicled her daily adventures in getting to know the land, culture and herself. La Finca is a lively memoir about a woman creating a new life amid countless challenges, including hurricanes that led her to reconsider everything. It is a story about trusting oneself, self-discovery, accepting disappointment and loss, and falling in love with a place.

Corky Parker grew up in Northern California in the 60's. Her first book, La Finca, won the 2022 Nancy Pearl Award for Memoir, and the 2022 University Presses’ Award for Book and Cover Design. For much of Parker's career, she was creative director for a small film and communications team she started in Seattle, writing and designing public awareness and corporate films. In 1996 she started La Finca Caribe, an offbeat, "eco-inn" on Puerto Rico’s Vieques Island, which she and her family ran for nearly 25 years. Around that, she worked in Alaska Public radio, owned a small sheep farm on the Olympic Peninsula and a gelato shop in Seattle. Writing, design and artwork have been integrated into all of it. Parker’s work has received accolades in the New York Times, the Wall Street Journal, the Seattle Times,  Outside, Lonely Planet, Gourmet, China’s People’s Daily, and Puerto Rico’s El Nuevo Dia, and has won numerous national and international awards. For more info her website is corkyparker.com

The Love Compass: A Girl’s Guide to Finding Authentic Love

Not Enough Time - My Poetry Book