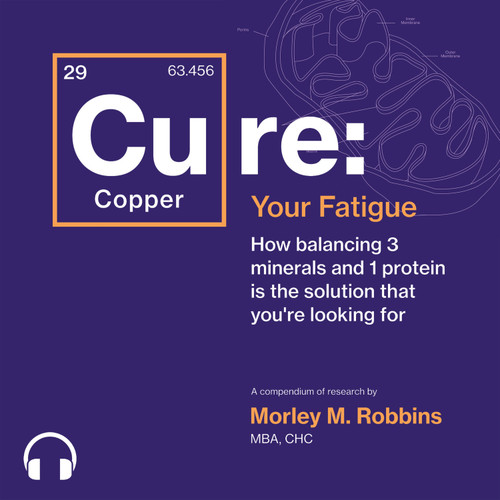 If you are suffering from persistent fatigue (and fatigue-related symptoms), then you’ve been “misled and misfed.” The path to regaining your energy and vastly improving your overall health is likely not what you’ve been led to believe. [Cu]re Your Fatigue will help you unravel the story of Copper, Magnesium, Iron and Ceruloplasmin and how their interactions have been intended by nature to maintain our health. Learn what happens when these interactions are interfered with, primarily as a result of following the accepted, yet highly flawed health recommendations we are all too familiar with.

Morley M. Robbins, MBA, CHC, is the creator of the Root Cause Protocol. Also known as “Magnesium Man”, he is one of the foremost experts on magnesium’s role in the body, and the delicate dance magnesium plays with iron, copper, and calcium. He received his BA in Biology from Denison University in Ohio and holds an MBA from George Washington University in healthcare administration, with additional concentrations in finance and marketing management. Morley has completed his training for becoming a WellCoaches Wellness Coach, a Ulan Nutritional Counselor, a Functional Diagnostic Nutritionist, and completed two levels of Jerry Tennant, MD’s Synergy Institute. In 2012, Morley founded the Magnesium Advocacy Group, and remains the de facto leader of the Magnesium Advocacy Group on Facebook, with over 205,000 members (and growing weekly). As a certified health coach with an expertise in Hair Tissue Mineral Analysis (HTMA), Morley has performed over 6,500 one-on-one consultations with clients from 45 countries around the world. Morley has a mainstream medical industry background. He had been a hospital executive and consultant for 32 years when in Fall of 2008, he developed a condition called “frozen shoulder.” His family doctor recommended surgery as the only hope for Morley if he wanted to be able to lift his right hand above his waist ever again. Friends who owned a health food store intervened and encouraged Morley to try chiropractic care. His initial response: “Thanks guys, but I don’t do witchcraft.” Several months later, the pain was unrelenting and continuing to wear on him, and his health food friends insisted. It only took a couple weeks of “light touch chiropractic care” (Network Spinal Analysis) before his shoulder had full range of motion once again. The experience was so life-changing for Morley, he questioned everything he knew—or thought he knew—about healing. He left the world of hospital administration and dove deep down the rabbit hole of natural healing, never to look back. In July 2009, Morley read Carolyn Dean’s wonderful book The Magnesium Miracle. He realized that this was a key piece of the health puzzle that virtually no practitioners seemed to be aware of—even in the natural health world. He was captivated by this mineral, and went on to read even more. Much, much more. After reading scores of books and thousands of scientific studies and articles (and counting daily), Morley has come to realize what the scientific, peer-reviewed literature from around the world makes very clear—even though it is not well known in conventional medical circles: All disease is caused by inflammation, better described as “oxidative stress”. And the root cause of this inflammation/oxidative stress is “cellular metabolic dysfunction” which is caused by an imbalance and dysregulation of three key minerals: copper, magnesium, and iron. This imbalance can be repaired—and we can feel much better—following the steps of the Root Cause Protocol. Spreading the news about these mineral truths is now Morley's full-time mission. He views it as his life’s work to push back the tides of nutritional insanity, and supplemental iron. He is fully committed to educating as many people as possible about how they can use the RCP to reverse this "root cause" mineral imbalance and end the plague of fatigue that fuels chronic disease throughout the world.

Looking for Calvin and Hobbes

Lion Dad: How to Nudge Your Cub into a Quality College Including the Ivy League

Redefine Wealth for Yourself: How to Stop Chasing Money and Finally Live Your Life’s Purpose